Banksy’s picture “Love in a trash can”, which was destroyed by a shredder embedded in the frame immediately after the sale, will be shown in Germany for the first time after the performance. 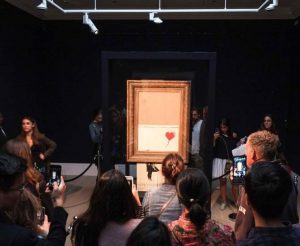 The exhibition will be held at the Frieder Burda Museum of Contemporary Art in Baden-Baden from February 5 to March 3.

In October 2018, Banksy’s painting “The Girl with a Balloon” self-destructed after the work of art was sold for $ 1.4 million at Sotheby’s auction. Later, Banksy posted a video on Instagram in which he said that he had mounted a shredder in the picture frame a few years ago in case it was ever put up for auction. The owner of the picture, preserving anonymity, gave the canvas a new name – “Love in the trash can”. The MyArtBroker service, which deals with the valuation and sale of works of art, suggested that after the action the price of the painting increased by 50%.

Founded in 2004 by the publisher and collector Frieder Burda, the museum specializes in modernism and contemporary art. The statement of the institution says that there were many people all over the world who wanted to present this work first, but the concept of the German museum was the best.