This is the first time that the largest auction house sells a painting created by artificial intelligence. 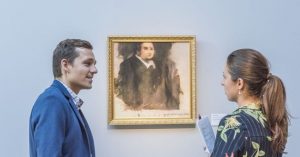 At Christieʼs auction, a picture of the French team Obvious, created using artificial intelligence, was sold for $ 432,000. Initially, the work “Portrait of Edmond Belami” was estimated at $ 7,000.

When working on the Belami Family series, which includes the picture that had gone from the auction, the participants in the Obvious were forced to compete with two neural networks. The first algorithm — the generator — looked at 15 thousand portraits of the XIV-XX centuries and began to create its canvases, the second neural network — it is called the discriminator — distinguished “artificial” works from the real ones. “The goal is to make the discriminator think that the new images are real portraits. In this case, we have the result, ”said representatives of Obvious.

In May 2018, the Bloomberg Businessweek edition placed landscapes generated by a neural network on the cover. The algorithm was taught by programmer Robbie Barrat, who became known after he forced the neural network to generate images with naked people (in fact, the neural network created dozens of surrealistic images that many users considered ominous). Barrat used the same generative-controversial method as Obvious. ““ Neural networks will become one of the main tools in the art of the 21st century, ”the programmer believes. “This technology has a huge potential that we have yet to unleash.”