An anonymous buyer of the most expensive picture of British artist Jenny Saville was a Russian investor, co-founder of Alfa-Bank Alexander Grinberg, this is the American edition news.artnet. 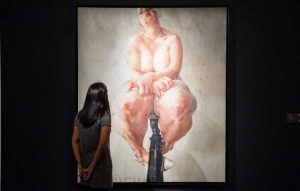 Let’s remind, on October, 5th at auction Sotheby’s in London for self-portrait “Propped” Jenny Saville has been paid $ 12,4 million which has helped Saville to become the most expensive among the living artists in the world. According to the above-mentioned publication, Greenberg personally traded on canvas by telephone, sitting in the last row in the auction hall.

To calculate the Russian buyer, about which almost nothing can be found on Google, journalist Kenny Shakhtar succeeded, sitting one row in front. He casually overheard the telephone conversation at the time of trading for the work of Jenny Saville. During the conversation, Greenberg was somewhat nervous as he had a rival for the same picture. He begged Helen Newman (head of the Impressionist and Contemporary Art Department of Sotheby’s – ArtsLooker) with which he was on the line to tell him: “Who is against me?”. Also, Helen insisted that he did not hurry with great rates, but did the next step in the amount of no more than 50 thousand pounds sterling. In response, Greenberg responded to her: “I’ll stop, I’ll stop.” After the bidding, both of them could be seen together, discussing the results of the bids on their telephone calculators.