One of the most talented artists of all time, Leonardo da Vinci, whose creativity and figure was shrouded in secrets, was an ambidexter. This means that his right hand was as tricky as the left.

This was found by the experts of the Uffizi Gallery in Florence, analyzing the picture of the master “Landscape Arno,” writes Phys.org. 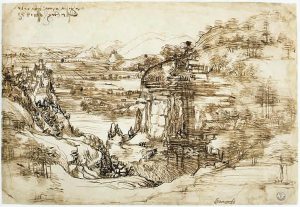 The artist wrote it when he was 21 years old – in 1473. On it Da Vinci portrayed the valley of the Arno River, flowing through Florence, with the castle of Montelupo.

On the back of the canvas, the master made an inscription and reflected it on the side of the landscape. Scientists have established that one note da Vinci made with his left hand, the other – right.

Earlier it was known that the master was a jerk and used a mirrored letter – his texts should be read from right to left. But now researchers have found out that the artist still under his age had learned to give advice both hands.

“According to the observations of his handwriting, including the inscriptions on this picture, it becomes clear that his letter with his right hand was well-formed,” – noted art critic Cecilia Frosinini.