Picture of Kerry James Marshall, created for the City Library of Chicago, was removed from the auction Christie’s. 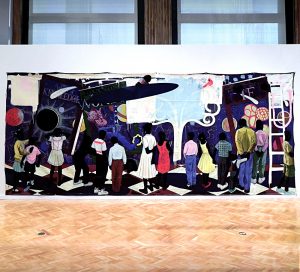 The municipality of Chicago has deliberated on putting out the monumental work of the African American Kerry James Marshall “Knowledge and Miracle” for the November New York auction of Christie’s. The lower estimate of work was $ 10 million, and the proceeds were planned to be spent on expanding the Lehrer Library, for which it was created in 1993.

However, plans to sell the product caused outrage of the public and Marshall himself, who told Artnews that the Chicago administration “squeezed every last drop out of the fruits of his work.” Last year, the artist sold one of her works to the city for a symbolic $ 1, and at the beginning of this year, the state company that manages the McCormick Place exhibition center decided to sell Marshall’s work “Old Times”, and in May she left for Sotheby’s in New York record $ 21.1 million

However, Chicago Mayor Ram Emanuel abruptly changed his mind to sell “Knowledge and Miracle.” What the Chicago Tribune admitted: “I realized that I don’t want this, especially considering the city’s contribution to the development of public art and the fact that Kerry is not only our friend but also an eminent representative of Chicago. I contacted him and said: “Listen, I do not want to sell it. If you are unhappy, I’d rather cancel everything. ”

Christie’s published a press release in which it stated that the work depicting black children looking at giant illustrated books on space was withdrawn “by mutual agreement” with the Chicago authorities.
The statement also says that Christie’s “has no doubts that this masterpiece is of great interest in the market,” and at the same time emphasizes that the auction house “actively supports” the development of public art.
“All parties are pleased that Kerry James Marshall’s Knowledge and Miracle will remain in Chicago. Both the city administration and Christie’s really wanted the product to not leave the city as a result of the bidding, and that’s what we’ve been working on for the last few weeks, ”the statement of the auction house stresses. According to the agency Bloomberg, the work will return to its former place in the library.