The picture, which is now considered the second version of “Judith killing Oloferna” by Caravaggio, will be put up for auction with an estimate of £ 86–129 million in June

In 2014, a canvas attributed to Caravaggio was found by chance in the attic of a house in the south of France. Since the discovery of his fate has attracted the attention of world experts, some of whom do not agree with the attribution and the general public. Now the picture is on display in the London gallery Colnaghi, and in June it is going to be put up for auction in Toulouse La Halle aux Grains. We recall her journey from obscurity in a dusty attic to news tops.

April 2014: Auctioneer Mark Labarb is invited to the Toulouse House to assess the large canvas on April 23. According to available information, at some point, thieves entered the house, who carried a number of valuable things, but did not take the picture, finding that it was worth nothing. The canvas depicts a scene from the story of Judith, a young widow from Bethulia, who saved her hometown from the siege of the Assyrians, captivating and beheading the commander Holofernes.

The French government imposes a 30-month ban on the export of works outside the country, while experts are considering the question of its authenticity.

April 2016: April 12, after two years of research, including a three-week study in the laboratories of the Louvre, the find is shown to the press, and the French Minister of Culture declares it a national treasure.

An expert on the old masters Eric Turken says that “experts, art historians, restorers, conservatives and radiologists studied the picture in an atmosphere of the strictest secrecy.” He adds that although “there is no consensus [regarding authenticity], I don’t strive for consensus. For example, the attribution of the Dublin canvas [meaning “the Kiss of Judas”, attributed by Caravaggio in 1991] in 2003 was still criticized. Caravaggio is really made for endless debate. ” 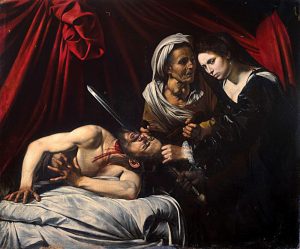 The painting is considered the version of “Judith killing Holofernes” by Caravaggio. Photo: Wikipedia Commons

Another Caravaggio specialist, Mina Gregory, reports The New York Times that she considers the painting to be a copy of the Flemish painter Louis Finson. In response to the question of whether Caravaggio’s creative experts put this find before a new dilemma, Richard Speer, an expert in Italian Baroque from Princeton University, said: “This is not a dilemma, and even not entirely unexpected since attribution opinions are divided.” Türken, meanwhile, insists: “I am more than sure that the painting is the lost canvas of Caravaggio, which [the Flemish artist] Frans Purbus saw in 1607.”

November 2016: The picture is exhibited for the first time in the museum – in the Milan Pinakothek of Brera – side by side with Caravaggio’s masterpiece “Dinner at Emmaus” (1605-1606). Pinakothek director James Bradburn says that the exhibition “Caravaggio. The question of attribution “gives the general public a unique opportunity to compare both pictures.

The decision to exhibit the controversial canvas provokes controversy, and art historian Giovanni Agosti leaves the Pinakothek Consultative Council to protest against the “uncritical” presentation of the painting, which “is not only privately owned but also put up for sale”.

January 2019: the export ban is lifted after the refusal of the Louvre to purchase this piece. After the painting is allowed to move freely, Turken says to Le Figaro: “This allowed us to start the restoration immediately. But the decision to sell will not be made before all the work is completed. Everything will depend on the owners and the auctioneer in Toulouse, who represents their interests. ”

February 2019: the work is brought to London to the Colnaghi Gallery for an exhibition that runs until March 9, after which it will return to Toulouse, where it will be put up for auction in the summer. Türken says that “this will be an auction without a reserve. It will be a real auction without guarantees, without all this nonsense, a real auction ”, and suggests that the buyer is likely to become a museum.