One of the most famous paintings on the political theme of the British graffiti artist Banksy called Devolved Parliament (“Degraded Parliament”) returned to the exposition of the Bristol Museum on the occasion of the UK leaving the European Union. Banksy reported this on Instagram on Thursday. 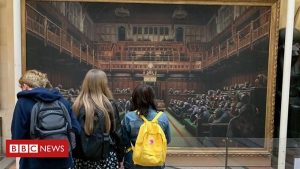 “I created it 10 years ago. The Bristol Museum has just returned it to the exhibition to mark the day of Brexit,” the artist wrote.

In the picture, Banksy depicted a meeting room of the House of Commons in which chimpanzees sit instead of deputies. The work itself is one of the most ambitious, made by the artist on canvas, was first presented in the Bristol Museum in 2009 and returned here again from a private collection. Devolved Parliament will be available for free to a wide audience from March 29 and will stay in Bristol until September. “When we showed this work 10 years ago, it caused a real stir and became one of the brightest exhibits of the Banksy exhibition in the Bristol Museum. Over the past years, this picture has only become more relevant,” said Philip Walker on the television channel ITV.

The UK’s exit from the EU was originally scheduled for March 29, after which, according to the plan, a transitional period should begin, which will last until the end of 2020. However, due to the inability of the British Parliament to accept the reached agreement on Brexit conditions, at the EU summit on March 21 a unanimous decision was made to postpone Brexit based on two possible scenarios: it will be postponed until May 22, if the British parliament approves withdrawal, or by April 12, if this agreement is not approved.