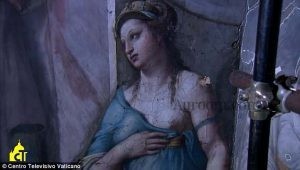 The room of Constantine, telling the story of the “adoption of Christianity” by the Roman emperor Constantine in 312 AD, is the last of the so-called Raphael stans, rooms of the former papal apartments whose walls were painted by the Pope Julius II in 1508 (simultaneously with the painting the vault of the Sistine Chapel of Michelangelo).
The fact is that the frescoes of the last largest hall began in 1519, and Raphael died suddenly in 1520 at the age of 37. It is believed that the painter personally did not work there, and the completion of the order was completed by his pupils who used other techniques.
“We knew about these two figures before, but only now we managed to study them in detail with the newest technologies available today,” the press service of the Vatican Museum said. They clarified that in the Hall of Constantine are restoration works, which allow more detailed study of the frescoes.
“Based on some historical sources and receiving the latest information about these two figures, the researchers can assume that they were drawn by Raphael himself, but as it happens in such cases, one can never say anything with certainty.” The hypothesis remains a hypothesis, although, very probable “.

Restoration of the Raphael stanza began several years ago and will be completely completed in 2022. At the same time, visits to this part of the museum did not stop for a day. The walls where the restorers work, often at night, alternately are covered with impenetrable panels.